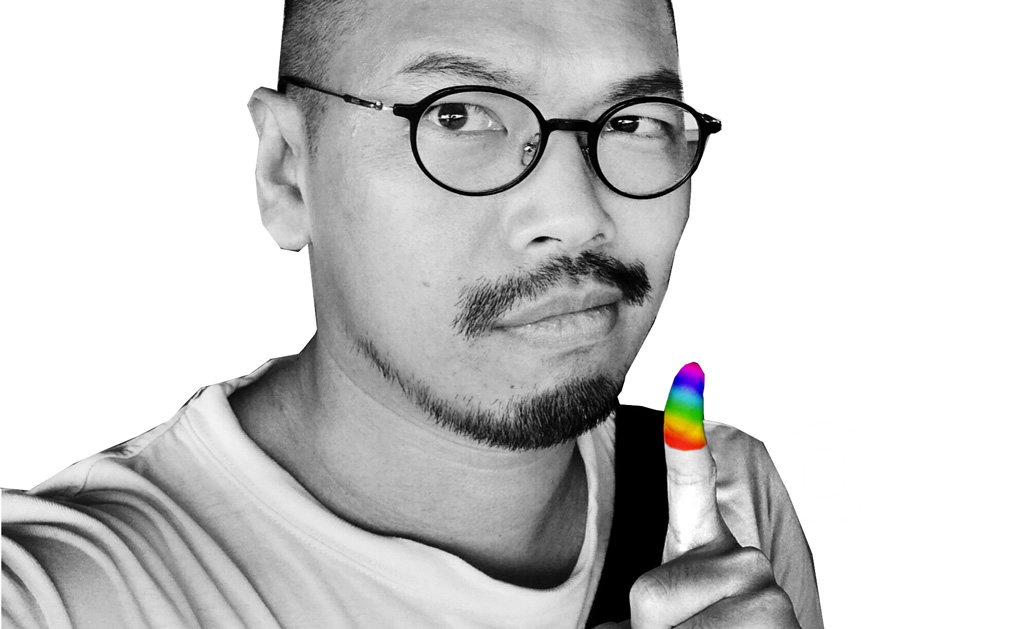 My heart swelled with pride when I heard that in Penang seven trans women volunteered as polling agents for a PSM candidate. Though nobody else wanted us on their side, many LGBT Malaysians got ourselves involved in GE14 anyway. All over the country, we came out as Malaysians and we volunteered and we voted. Some became polling agents, some recruited volunteers, some helped campaign for candidates, some funded flight tickets, some drove voters to polling centres, some bought food for others, and many many more went out and voted. I want to acknowledge all LGBT Malaysians who gave our hands, hearts and votes to the great cause of fighting for democracy in Malaysia, and who did all these in spite of being told the country is not ready for us yet. Because it is okay, we have always been ready for our country.

Yes, leading up to the elections, we were told, “Rights for LGBT people are not important now.” We were told, “Malaysia will NEVER recognise LGBTs, it is haram, why don’t you move to another country?” We were told, “Don’t mention LGBT. You could cause a backlash towards the opposition.”

So, yes, change government first, don’t jeopardise the opposition’s chances, because you know, haters gonna use it against the oppositions. Hello. Haters are using anything they can get their hands on to throw at the opposition lah. The opposition is the target of the mud-slinging; we are the mud.

But mud can be fabulous too. Kuala Lumpur is named after it. We were part of this country’s earth before this land had a name. We are your bumiratu. From the days when it was harder to admit to one’s identity till today, gays, lesbians, bi men and women, trans men and women, and other types of lovers, have gone and quietly done the sordid work of laying this country’s foundation. Today we continue that work. It goes beyond the elections. Frustrated by an unjust system and unequal rights, some of us have joined NGOs and fought for workers’ rights, women’s rights, refugees’ rights, children’s rights. LGBT Malaysians have been fighting for your children, your mothers, your communities, even while fearing we could lose our families and communities at any moment.

I remember walking during the first Reformasi march with a gay Malaysian who was chairperson of a human rights organisation. I know a gay man who was arrested under Operasi Lalang for his work organising unions. I know queer women who worked in organisations that help women who were victims of abuse and rape. The trans people of SEED Foundation have created daytime shelters for the poor of Chow Kit to rest. So much love and compassion and rainbow to shelter those without homes. Some become artists, journalists, performers, and told stories of injustices faced by orang asli communities, the disabled, the ones evicted from their lands, the ones bullied by corporations, the ones killed in detention. While we abided by a system that denies us our voice we became the voice for others.

Yet, LGBT people in Malaysia are treated like election condoms, used as protection by the politicians against losing precious drops of votes. Then discarded and used as evidence against itself. Eee condom! Dirty! We hear Malaysians encouraged not to vote for a particular candidate due to her support for LGBTs. A very few candidates and PSM openly support us. But otherwise we mostly hear candidates promise to curb the spread of LGBTs. The previous ruling coalition spent a huge budget to try and straighten us. In his final election speech, Mahathir said some great things about gender equality but then he just had to go and add this: we must never allow extreme desires. If you recall Sodomy 1, you know exactly what his extremes are. Perhaps we should just assume “extreme desires” mean greed, corruption, and abuse of power.

Yes, we have allies who stand with us. And we love them. But most of the time, what we hear from others are: “This is Malaysia lah. Just be be grateful you are tolerated. We have no problems with LGBT people. Whatever you do in private is your business. But LGBT rights will never be allowed. Don’t test our tolerance.”

Privacy is offered as a kind of reward for those who work hard enough, well connected enough, to be able to afford their own space. If we can afford privacy, we get to do whatever we like in it. And many do. Including those who abuse others in private spaces. In private as in public spaces, power is not balanced and those who hold power in these spaces get away with more.

I know a gay teenager in Sabah whose schoolmates found out he is gay. A few of them cornered him in the school toilet, forced him to perform oral sex. He refused and they beat him up, knocking his head against the urinal. Bloodied and battered, he was taken by friends to see the school headmistress. But all she said was, “I hear people say you are gay. If you are, we will expel you.” Two days later, she expelled him. You see, LGBT people want the right to report crimes done against us without fearing that the person we report it to might commit crimes against us too.

When we receive these stories, sometimes we really don’t know what else to do but bring attention to them. We talk about them. That is when Malaysians tell us: this is Malaysia lah, you cannot ask for the right to be gay. The right to be gay? We are asking for the right to be treated as a human being. To be free from violence and harm. And when violated to have the right to seek justice. Since when is justice a gay thing?

So you know what many of us do in most instances? Exactly what you told us to do: keep quiet, stay private, suck it up, suffer on. We are trained to put up with jokes by families about LGBTs, then we learned to put up with bullying in school, then we graduate to putting with discrimination at work and public life. Then when really horrible things happen, we put up with them too. We have been trained all our lives to accept that this is our reality. Work hard, earn enough, own a private home, be grateful to be tolerated, be left alone. In exchange, we surrender our voice, like the little mermaid.

After surrendering our voices, how do we tell others when bad things happen to us? Keeping quiet has not made us more tolerated. Keeping quiet only enabled more crimes to be perpetrated against LGBT people. People think they can get away with doing it to us precisely because they know we have no one to tell it to.

In a house where horrible things are happening to a family member in the back room, everyone who tells her to just keep quiet is complicit to the abuse.

Wait. In a house where horrible things are happening to a family member in the back room, we tell her to accept this is the reality because actually the rest of us like this reality, because in this reality the lucky ones have privileges, so will the unlucky ones not take away our nice reality please?

So yes, now we have some changes in Malaysia. We are still told, wait, not yet. Okay. When then?