After the removal of the portraits of LGBT Malaysians in August in Penang, it felt risky to be doing anything queer in Penang again. But three months and several risk management meetings later, we pulled off a very queer George Town LITERARY Festival, where we asked ourselves questions like “Are the Arts just bigger closets?” As this year’s George Town Literary Festival was themed The State of Freedom, festival director Bernice Chauly felt it important to celebrate queer writing and invited me to be one of the curators. My task, particularly, was to help programme some of the queer panels as well as invite a few queer writers to speak.

Yes, we were all a little nervous, but Bernice was adamant we take this chance. It was going to be her last festival as director. If we are going to celebrate the freedom of expression, we must do it, not just talk about it. Even if we needed to have risk assessments to make sure we do it right.

So we did it. And we did it by talking with each other about it every step of the way, making sure each of us are on board with every decision, making sure each of us know what to do before, during and after, making sure that we each have a say, that everyone is emotionally okay, and most importantly, that we know we are all in it together. Organising this festival with this team, with the support and freedom given to us by the Penang State Government and our producers at the Penang Convention & Exhibition Bureau (PCEB), has been really empowering and inspiring.

In order to make the festival accessible to younger queer writers not based in Penang, I also managed to raise RM5800 from 18 rainbow angels (thank you, you know who you are!) which enabled exactly 18 young queer writers to travel to Penang and attend the festival. Below are some takeaway reflections from a few of them. Can we expect the great Malaysian queer novel anyday now? How many queer portraits can we put up for every single one they take down?

I’ve attended queer-themed events at George Town Literary Festival before and they were great but this year something was different. When I walked into one of the queer panel discussions, “Q-riosity: Translating identities in the margin”, I was amazed at the sheer volume of people wanting to be there, so much that latecomers needed to sit in rows on the ground. It was surreal. What I felt was some kind of validation or even solidarity. I was told that queer identities are real, that they mattered to everyone in that room, not just me. It gave me hope, something we desperately need right now.

“I too must open my mind”

Last week at the panel “Intersectionality at the Intersections” at GTLF, I learned of Sabahan poet and craftmaker Eleanor Goroh, who spoke about her difficulties in keeping her culture alive. How she had to not only understand how a musical instrument works and create art with it but also understand the instrument’s construction and the materials needed to perform repairs because nobody else could.

And of Anthony Chong, who is both deaf and queer; how he was shunned by his own community and how he dealt with the little things that we take for granted. Like when a stranger would come up to him to ask for directions, not knowing about his disability, and upon finding out, they would just walk away, not even trying to communicate.

I realised I may have done this before when I was younger. It’s a realisation that if I want people to understand who I am, I too must open my mind to their difficulties. People say intersectionality is the future of activism. I think they are right.

“Creating a safe and accepting environment”

It’s my first time attending GTLF and I’m coming in as Anthony Chong’s sign interpreter. GTLF was perhaps the most inclusive and radical festival I’ve ever been to in Malaysia. My late mom was my first feminist role model. She was a non-conforming single parent and was well accepted in our local LGBTIQ+ community. I grew up surrounded by the loveliest gay individuals. So attending GTLF was a form of protest, not simply to celebrate literature.

I often ask myself, as a ‘straight-passing’ person, how can I support my LGBTIQ+ friends without feeling like an imposter within my own community? The friends I made at GTLF – both Deaf and hearing – gladly answered my questions, and I asked a lot. I did a lot of crying at GTLF; Ivan Coyote, Harji, Pang and William Yang in particular made me cry multiple times. If I had to summarize GTLF for those who didn’t get to attend it, is that being an ally of the LGBTIQ+ and Deaf community is a lot more than supporting same-sex marriage, attending LGBTIQ+ events and donating money; it’s about creating a safe and accepting environment for all LGBTIQ+ and Deaf individuals, everywhere.

“To write as little as possible”

A literary festival ends – I am renewed. I met Sjón Sigurdsson, the brilliant novelist and storyteller. Sjón is also an Oscar nominated lyricist and collaborator to Björk, who co-wrote the songs in ‘Dancer In The Dark’, and tracks like Jóga, Bachelorette, Oceania, Wanderlust and Virus. I’m a huge Björk fan.

Sjón was tremendously warm and approachable. We talked for a bit on the concept of human as an island and the notion of solitude and loneliness that each island, each human possesses. Solitude, or loneliness, is inevitable. I also attended his forum where he shared to us his creative process – he tries to write as little as possible so that it doesn’t seem like work. This sentiment resonated with me so much I teared up.

I force myself to write, sometimes, even when I really and absolutely can’t write that I become bulimic: anxiously, stressfully, painfully purging words out of me. To hear an accomplished writer like Sjón say that it’s okay to write as little as you can – not because you lack discipline but because you don’t want to hurt yourself – is a relief.

What stood out to me at George Town Literary Festival was Nico Lang’s workshop titled ‘How to Ask Better Questions’. What I have learned is that it is all about having an emotional intelligence and knowing your subject well enough in order to come up with the right questions – and of course to not get into extremely awkward situations, like asking the same question twice, including off-topic and personal questions, and even offending the subject with uncouth ways of asking things. This also made me reflect and to look at my personal character under the microscope; I have a tendency to get things done quickly and efficiently without factoring the human connection – which is something I discovered I tend to do while I was writing this very paragraph. Forging alliance is much better than burning bridges. We cannot live alone in this world; it is the connections with people that make things happen and create a much more fulfilling life. 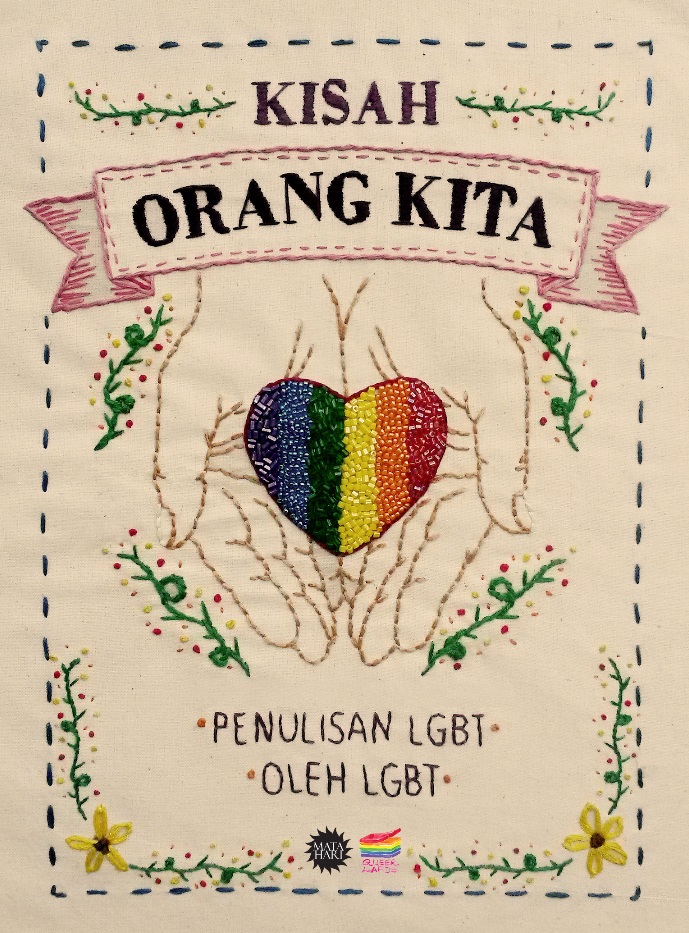 One defining moment of that trip was that the embroidered book cover I did for Kisah Orang Kita (published by Matahari Books and launched during the festival) was auctioned off and sold. Everyone’s love and appreciation for the work I did meant a lot to me and I do know that it also meant a lot to everyone especially the rainbow community.

“You can be Malaysian and queer and proud of it”

I’m positive that the queer literature scene in Malaysia will flourish from here onwards; the reception of it has been amazing from my observation there. I just wish more queer Malaysian stories by actual Malaysians are actively encouraged. Now there are so many conditions and rules about what makes good queer stories. For instance, I heard so many accounts of gay literature being rejected for not “conveying true messages and struggles of queer people” because the story ends on a happy and positive note. As if our stories have to be sad and serious. I don’t think this should be the case – if straight people can have a million kinds of writing, then we should have the same thing.

I also personally love young adult literature and would love to see more queer writers write queer YA stories that is authentically Malaysian. We need to let our youths know that you can be Malaysian and queer and proud of it. Attending GTLF gave me optimism that this is possible, and I am so ready for that!

“The solace of an unspoken unity”

For all the literary revelry, what stuck with me was not a book or a poem. In its own understated way, George Town Lit Fest was also a sanctuary of queerness. We watched a gay man stand proudly on stage, reciting to us an illustration of fear that might have stopped him doing so on some other day, in some other place. We heard tales of love that might have been brutally and abruptly silenced beyond the four walls around us. I sat among people, some queer as myself, sharing in the solace of an unspoken unity. Perhaps a day might come when things are different – when we truly become a country of inclusiveness and kindness; a country where we can celebrate each other’s differences instead of being divided by them.

Deaf gay man on dealing with rejection from everywhere