IT IS 10.25AM in Leisure Commerce Square, the office complex that sits between Subang Jaya and Petaling Jaya. The former base of operations for Taylor’s College. It is 2009. You are 21 with a Coca Cola addiction. I am almost 19, wearing sweaters two sizes bigger to fit my father’s insecurities. Barack Obama became the first black president. You were the first eligible brown boy to walk into our predominantly female classroom. The two girls I sat with swooned over your frizzy island hair. You introduced yourself saying you had the name of a king in Maldives. Up until you arrived, we only knew Maldives as one of the country options in the drop down menu of online forms. You were cute by everyone’s standards. Too short by mine. A ‘Dare’ surfaced within the hour. One ringgit for anyone who asked the new boy out to lunch. I shrugged turned around and asked you to join us for lunch. You gladly accepted. The girls gasped at my brazen move. They saw it as betrayal. Girls who talk to boys without inhibitions spoiled the game for other girls. The game is the chase. We are told to ‘Make him want you’. ‘Wait for him to ask you out for lunch’. Good girls are patient. They pressed a gold RM1 coin in my palm. Your value is equivalent to a recently demonetised one ringgit coin. And my best friend. No one believed us. Rumours went around that we were kissing behind the 7Eleven in Block A. We found ourselves giggling, making videos of car rides to Sunway Pyramid and teaching my tongue Dhivehi. One rainy post-assignment afternoon, we jumped into your condo’s swimming pool with all our clothes on. Because we could. I am told by a very Catholic aunty that people enter our lives for a reason, season or lifetime. When we were squeezing our clothes dry into a potted plant, I decided that you would be the rest of my life. Billboard’s Song of the Year was Jamie Foxx’s ‘Blame it on the Alcohol’. While bobbing our heads to ‘AH AH AH AH Alcohol’ you taught me how to order a martini and that Muslims can drink as long as they don’t get drunk. I was your designated driver. That year, your two year relationship unravelled. Your girlfriend wanted more and you wanted more in the opposite direction. To celebrate, you took me shopping. You bought me my first dress. We cut and coloured our hair. We were beautiful for as long as we were sure. Then one day, you stopped being certain. We sat in my parked car outside Mentari Court. It was the worst place for a confession. The radio played ‘Knock You Down’ by Keri Hilson. Kanye West and Ne-Yo. It was your favourite song. I learnt the lyrics to sing along with you. We waited for the end. “Mel, I think I’m gay.” I stared at you for a long time. You looked away from me. It was our year of trying everything once. I thought you were just trying it out. But you were sure that you were not sure. As unsure as you were scared. I asked “Okay. Are you sure?” You said “I don’t know. I think I like guys… sometimes.” So I did the one thing I knew how to do in moments of uncertainty. I said “Let’s find out.” 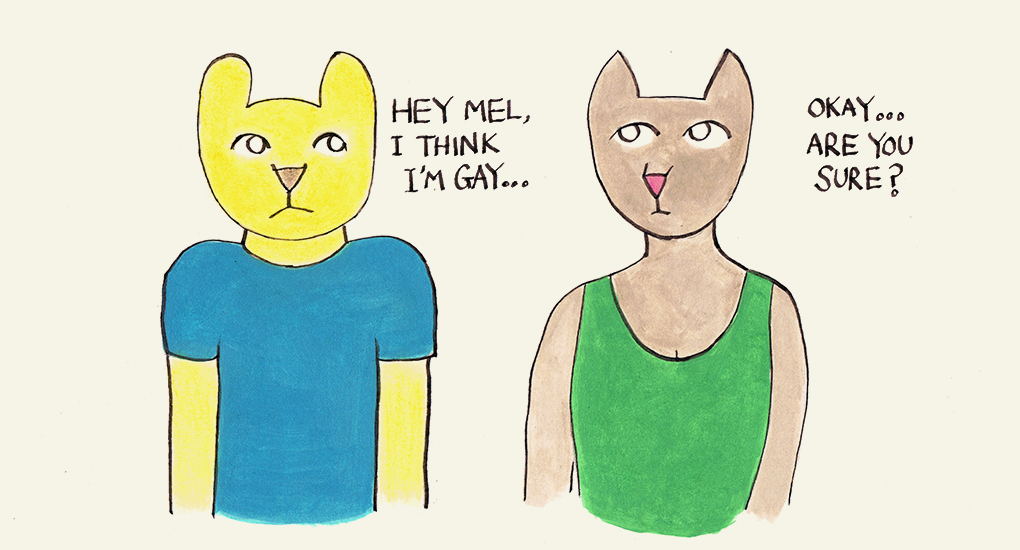 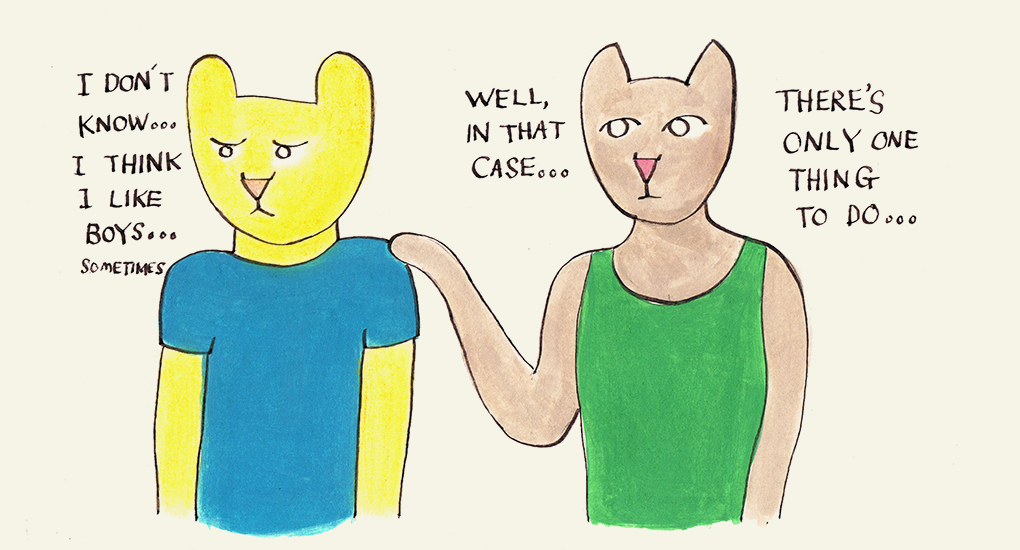 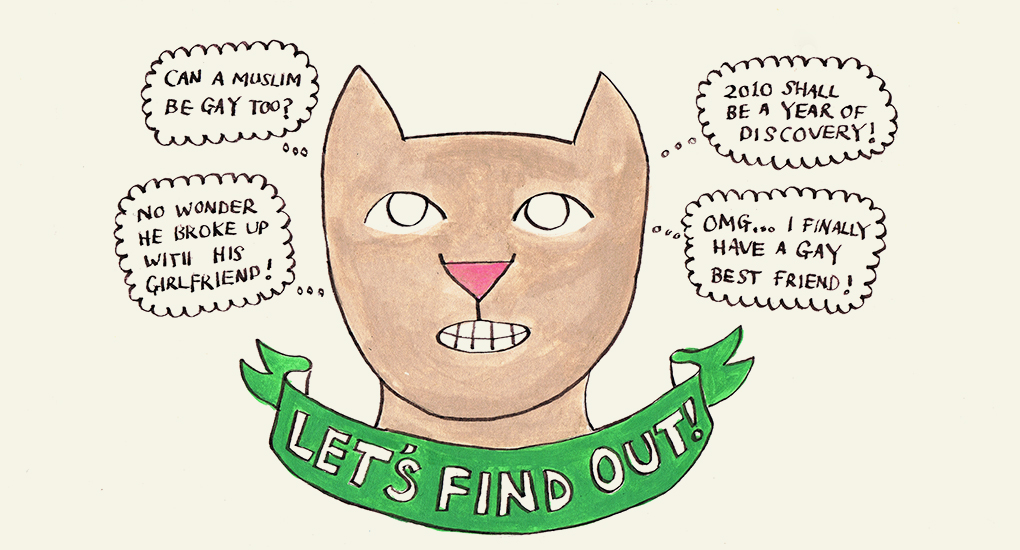 The rest of 2010, we screened what you like and didn’t like. Chinese boys were a Yes. Tall boys were a yes. Girls were still attractive but only their top half. Boobs and brains. The allure of a woman quickly diminished by 2011. You were terrified about what Allah would think. “Mel, I can’t change my mind. I like boys. Just boys.” You were sure this time. I wasn’t uncertain any longer. We hugged for a long time and said “Okay” multiple times, like we were trying to come to terms with our own truths. You are a Muslim gay man and I was dating a Muslim black man. The lack of God was our common denominator. He did not show up for your HIV scares or my JAKIM terror attacks. All we had were pamphlets with new vocabulary about sexuality. That year, we learnt that there were more sexual orientations besides being straight or gay. We thought ‘pansexual’ was a sexy pancake. We also learnt to never sit in a parked car past midnight. When you graduated with flying colours despite last minute assignment submissions, someone in our class said it was because you were gay. Smart people tend to be gay and gay people tend to be smarter than most. We did not understand this. We almost believed them. Until my progressive boyfriend quoted author David Rakoff who said “being gay does not make one witty. You can suck a mile of cock, it still won’t make you Oscar Wilde.” This seared into our minds. This assured us. My boyfriend and I broke up. You broke the hearts of too many Chinese boys. I told you that just because you’re a new gay person doesn’t mean you get to be an asshole. That stung. You got your heart broken. That stung worse. You swore off relationships. I got caught up too many potential ‘The One’s. One day in 2013, you told me that you could not bear to return to your country. Maldives is a dot on the atlas. It is so small that the signage to point it out was often bigger than it was. We spent years joke-worrying that Maldives was sinking into the ocean. Bit by bit. That day you were more afraid of standing on your motherland than drowning. “I can’t go back, Mel.” We found you ways to stay here and later in Norway. You fell in love. You kissed him at a Pride parade holding the Maldivian flag. There was no going back. You were sure. I was sure that you were. We are beautiful in once a year phone calls and Instagram selfies. “Look at you!” we’d say. To this day, when my father asks how you are, I’d tell him you’re happy and gay. Once, he asked me why I used two adjectives to describe the same kind of happiness. I’d explain that you are happier knowing that you like men and he would hush me. “Don’t say that! People don’t need to know. It will lower his value. How will he get a job?” I remind my father every year that you are both happy and gay. And sometimes hired in Norway. He nods now. He is sure now that you will not be changing your mind. He is sure that I will not be changing my mind about your value. My gay best friend, a lifetime and a one ringgit coin with appreciating worth on eBay. I wear dresses more often now but I’m hardly a good girl. Too straightforward. Straight and forward. My “gay-dar” has since improved but it has little purpose. Knowing someone is gay before they do isn’t exactly a skill. It is a poor introduction and the start of a pointless dinner table conversation. Nobody wants to be outed by other people. Nobody wants to be considered interesting solely because of their sexual orientation. I no longer introduce you as “my gay best friend”. Just “best friend”. I have since learnt my place. Or rather my position in your arc. I stand beside you. When you decide who you are and whether the world needs to know you for you, I will be on your right side, which you often mistake for your left. When you are unsteady of your place in this world, you can stand on my feet like we did when we went swing dancing. Trying to learn all the steps. One at a time. I stand with you because I friend you. And I’m going to keep friending you. In all the ways we know. In all the ways we’ll spend a lifetime figuring out.

Melizarani T Selva is a spoken word poet, arts curator and author of a poetry collection titled Taboo (2015). She is still learning how to make friends and keep them.