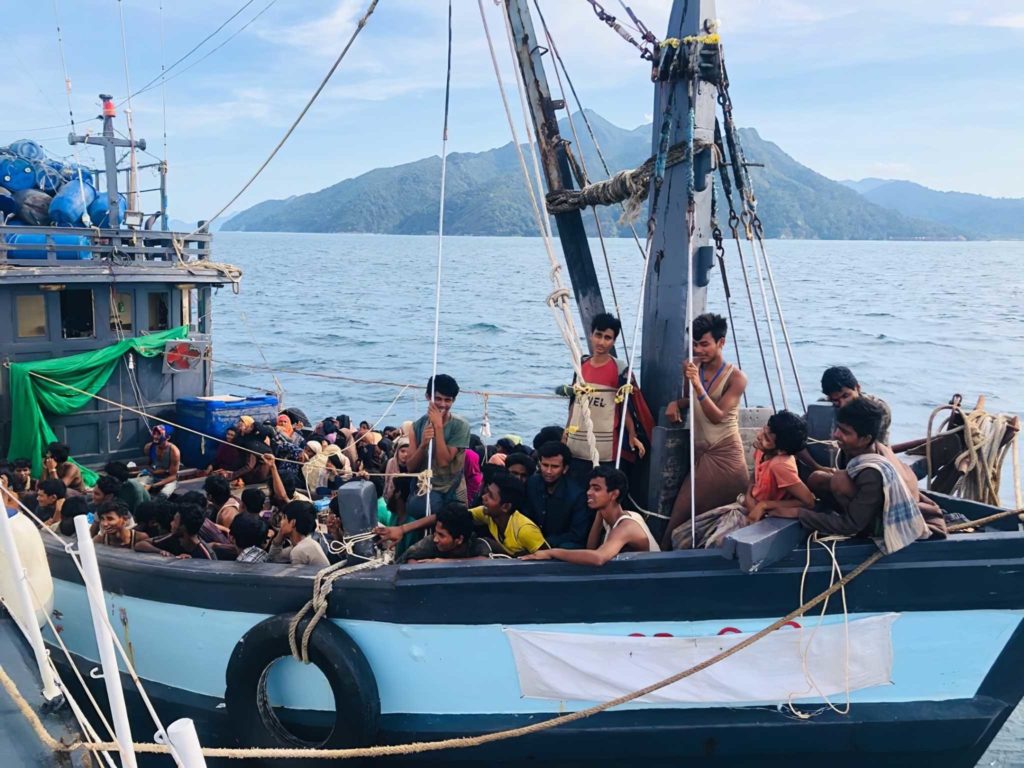 ACROSS THE GLOBE, the Covid-19 pandemic is exposing inequalities that have been allowed to fester for centuries within national borders. Black and brown people in the United States are more likely to be seriously ill from this virus; India’s lockdown has stranded millions of day labourers far from home, without the means to feed themselves or their families; East Asians face scapegoating and racist attacks in the West; Africans face the same in China. Most of us are quick to deplore these failings of nation-states and communities: we feel that nations should be able to do better by all their citizens than the US and India have done, and we recognise hate crimes against minorities.

Yet when our compassion collides with the borders of the nation-state, those borders win. On April 16th, the Bangladeshi coast guard intercepted a boat carrying Rohingya refugees. There were 396 starving humans on this boat; at least 32 people are reported to have died on it, from lack of fresh water, food, and medicines. Afloat at least 2 months, they were turned away two times from landing in Malaysia before they were eventually rescued in Bangladesh. The very next day, the Royal Malaysian Navy—following a tip-off from a Royal Malaysian Air Force surveillance aircraft—stopped another boatload of 200 refugees from entering Malaysian waters. The passengers were given food before the boat was made to turn around. Its fate remains unknown.

These are only the two most recent tragedies in a humanitarian crisis that has been going on for years. We don’t know exactly how many Rohingya boats have capsized, or how many people have drowned; more than a thousand refugees drown in the world’s seas each year, but most of these deaths pass unreported.

Our media praised the “prompt action” of our air force and navy on April 16th as a “success”: if we allow “foreigners” in, we’re told, they “might bring Covid-19 into the country.” We’re asked to believe, in other words, that containing this pandemic is a mission that must supersede whatever convictions we may once have had about human rights, global inequality, and social justice, if those convictions are incompatible with national borders and visa requirements.

Where to file people who fall between the cracks

Even those of us who come forward to help the desperate within our communities don’t know where to file people who fall between the cracks of the nation-state model.

Refugees, migrant workers, and undocumented immigrants, all of whom provide the cheap labour on which we depend: confronted with their presence in our countries or our waters during this time, we react first with fear. Some of this fear, such as non-Muslims’ anxiety when considering the prospect of large numbers of Muslim refugees or immigrants, precedes the pandemic. We have been conditioned to think of our country as a zero-sum game, each ethnic group battling the others for its fair share of the pie, and in this every-race-for-itself scramble, outsiders are an additional threat: if we allow more Rohingya refugees into the country, non-Muslims will become an even smaller minority.  We choose to ignore the fact that it’s minorities of all types who are most at risk during a crisis like this pandemic: we need only look at how Muslims have been blamed for deliberately spreading the virus in India, or at the witch-hunting of gay men in Morocco, to remember that the first victims of any crisis are those who were already outcasts.

Lacking the tools or the means to call for the separation of religion and state, we turn instead against people: the Bangladeshis, the Indonesians, and the Rohingya become our bogeymen. We cobble together hypothetical scenarios and scant anecdotal evidence to invent a threat that ignores one very salient fact about refugees and asylum seekers: they are people who have been failed by their home countries because they, like non-Muslims in Malaysia, belong to minorities. Religious and ethnic minorities fleeing oppressive regimes; LGBTQ people fleeing homophobic laws; ex-Muslims and atheists fleeing theocracies: when we close our doors, these are the people we are turning away.

There must be no better options

“You have to understand that no one puts their children in a boat, unless the water is safer than the land,” Warsan Shire reminds us in her scorching poem, “Home,” which should be required reading for anyone. Especially those who cite the RM2,000 Rohingya refugees apparently pay their traffickers as proof they don’t need our help. What the money actually proves is desperation: if you are ready to spend your life savings and more—money perhaps begged or borrowed—on a life-threatening journey to an unwelcoming foreign country, there must be no better options.

But it’s the virus, our common enemy, that has united Malaysians across racial and religious lines in our hostility towards refugees. Blinkered by our fear, too many of us give in to the temptation to shut out inconvenient truths from the rest of the world. We tell ourselves we must focus on protecting our country, which we can only do by closing our borders and sealing the migrants already within those borders into dormitories where they will not be able to infect the rest of us. Now is not the time to welcome refugees, because—or so we believe—resources are finite and “our own people” must be our first priority. We already have enough of “pekerja asing tanpa izin” (migrants without permit) here, one person writes when I raise this issue on a volunteer forum, while others argue that Malaysia cannot afford food and shelter for refugees.

A portal into another world

Reading these responses, I think of the growing number of voices urging us to think of this pandemic as an opportunity to ask big questions. We don’t want to “go back to normal” after this, these thinkers say. Large-scale social change is suddenly more possible now than it has ever been in our lifetimes. Within a few short months, the pandemic has cleared skies, forced a ceasefire in Yemen, found housing for the homeless of multiple cities. We’ve shown ourselves to be capable of addressing our most urgent crises through collective action.

Arundhati Roy has called the pandemic a portal through which we can, if we choose, step into another world. Of course, this will be more difficult than the metaphor suggests. It will require research and thought, expert opinions, experiments, mistakes, failures. But governments are already considering changes they were too cautious to begin a year ago: Amsterdam, for example, is embracing the “doughnut” model of sustainable development, in which economic growth will no longer be the primary measure of the city’s well being.

Like economic growth and GDP, the nation state is an idea to which we’re so attached we’ve largely forgotten how to question it. Considering alternatives has been the province of academics and those we perceive as political radicals. Two years ago, the writer Rana Dasgupta chronicled the demise of the nation state in a long article for the Guardian. Calling for a new conception of citizenship, he pointed out the glaring inconsistency of nations’ attempts to neutralise advantageous accidents of birth through welfare and education while maintaining the notion of citizenship:

“Citizenship is itself the primordial kind of injustice in the world. It functions as an extreme form of inherited property and, like other systems in which inherited privilege is overwhelmingly determinant, it arouses little allegiance in those who inherit nothing. […] 97% of citizenship is inherited, which means that the essential horizons of life on this planet are already determined at birth.”

Our children may remember this time

The truth behind these inarguable facts can be destabilising: that only blind luck, unearned and completely beyond our control, separates an affluent Malaysian from a Rohingya refugee in a boat. Yes, a citizen who lives and works and pays taxes in a nation state is contributing to its upkeep, but look around you in any Malaysian town and you will see that immigrants, some of them undocumented, enable the Malaysian middle class standard of living.

Refugees do not expect to be housed and fed for free indefinitely; most of them dream of building a new life in their host country, and that dream includes meaningful paying work. In the twentieth century alone, refugees have contributed immensely to the economies and cultures of their new countries. What would the recent history of North America and Europe look like without refugees? But even this argument is beside the point: human rights do not have to be deserved or earned. We should not measure the worth of a refugee’s life by a projection of what he or she will be able to give back to our society.

The virus has made glaringly obvious what we already knew: that across the arbitrary borders to which we’ve submitted for generations, we are all connected. Even as we busy ourselves with stopgap measures to feed “our own” people, we must step back and ask ourselves why global inequality exists, and how we have been complicit in it. Why are some countries poor and others rich? Why do governments allow capital to flow freely, but not people?

How can we use the pandemic portal to undo an imbalance of power and an unequal distribution of resources that is going to prove itself increasingly unsustainable?

In a few decades, our children may remember this time as the defining moment of their childhoods, the point at which their parents chose one out of many possible paths for their future. I am not a person given to certainties, but I know this one thing: a citizenship status I did not earn is not going to define the limits of my compassion. In the world I dream of for my children and their peers, those who have inherited privilege share it with those who have not.

Preeta Samarasan is a Malaysian writer who lives in France with her husband, their two daughters, and two cats. Some of her favourite things include Baroque music, modernist poetry, asam boi, Nyonya kueh, and social justice.