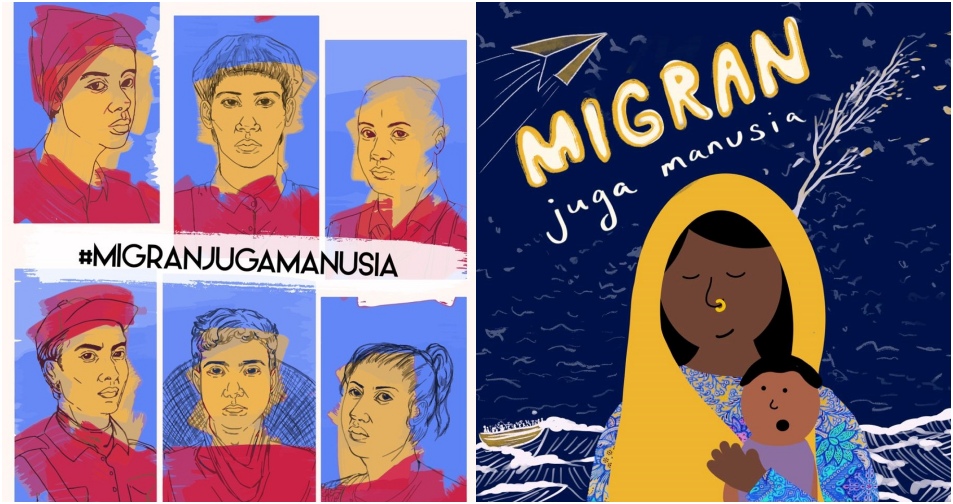 On Labour Day, a photo taken discretely from a window started to circulate. It showed people lining up on the street personnel in hazmat suits scattered around them.

The government cracked down on migrants and refugees in KL that day.

Posted by Amnesty International Malaysia on Friday, May 1, 2020

They were forced onto the streets by the police and armed forces, and those without documentation—children as young as four—were pushed into trucks to be sent to migrant detention centres.

On 3rd May, the #MigranJugaManusia protest erupted online in response, and we are proud to see queer voices joining in the chorus of demands for migrants rights.

We wanted to feature some of their posts and interviews here on Queer Lapis.

Among the many great lies we told ourselves is our immunity and the immunity of this country iss built through singular, individual merits. To deny migrant rights is to deny the foundations of Msia, our identity and ancestry. #MigranJugaManusia pic.twitter.com/DQCygaw4Kh

How long can we be complicit in the mistreatment of migrants?#MigranJugaManusia pic.twitter.com/Cg0GmIgEQe

Overwhelmed, helpless, drained, was how I felt all of yesterday on Labour Day. There were mass arrests of migrants and refugees around Kuala Lumpur with reports of children as young as 4 years old being detained. On a day that is meant to celebrate and honour the workers who have been historically exploited for their labour doing the work we don't want to do, I am so angry and frustated with the way the state continues to dehumanise and compromise the safety, security and wellbeing of migrants and refugees. Two weeks ago, 200 Rohingya refugees who were turned away on boat. Not only is choosing to crackdown on an already vulnerable community so fucked up and a violation of so many human rights, these mass arrests prevent these communities from being able to physically distance during a pandemic and it prevents more people from feeling safe to want to come forward if they are ill. This is a clear fucking breakdown and comprimises the effectiveness of your public health strategy on containing a pandemic. Labour rights, migrant rights, and refugee rights ARE human rights. During this time, we need to be more critical than ever because the groups at the top will do anything in their power to further push for their capitalist, sexist, racist homophobic, transphobic, xenophobic, and ableist agendas. Join me in a virtual protest against the dehumanisation of migrants and refugees happening tomorrow from 2.00pm-3.00pm! If not, take the time to learn more about the deterioriation of labour rights + unions and the rise of the union busting industry as well as the history of labour rights in Malaysia. Check out my story / highlights for more info on the protest and these resources! #MigranJugaManusia #NoOneIsIllegal #EndMigrantDetention #MigrantJustice 📷 @natfwl

When I saw the picture on Twitter last Friday, I immediately associated it with a picture of similar lines in German occupied Poland 80 years ago. It too was a line of human beings depicted in an inhuman and degrading way, and the horror stories that proceeded after was appalling. On Friday, it was no different. Even children were torn away from their parents; a thought that still haunts me as I write this. COVID-19 has revealed that even at the height of a pandemic that is impacting the entire human race, it will not stop us from further “Othering” the marginalized and the exploited. Despite the actions of the authorities and the government, what saddens me the most is the public support for these kinds of heinous acts against migrants and refugees. Even worse is the level of hate being hurled at activists and human rights champions who are fighting for their liberation. The individuals within this protest movement who face the brunt of these hate messages are those who are of racial minorities themselves, further perpetuating the notion of “pendatang”. Yet, we stand together, in solidarity, because no human being is “illegal”. Everyone deserves to be treated with dignity. Governments should not buckle into panic and pander to popular conservative ideals in the name of power. Do what is right and quit exiting from your responsibilities through the back door. Bukan sahaja #KitaJagaKita, tetapi #KitaJagaSemua. #MigranJugaManusia #malaysia

A virus is no excuse for putting more people in cages. As we duduk rumah, the government has detained hundreds of refugees and migrant workers in KL. Babies and families rounded up into trucks and sent to detention centers. . What do we do as we watch from our screens? Who does the MCO protect? On this land, who gets to be human, to count, to live? What kind of society have we created, if we have to even say that the people this country exploits — both migrant and indigenous — are “human?” . What is the world we want to live in? What infinite possibilities can bloom from our hands? #migranjugamanusia #malaysia #malaysiatrulyasia #wawasan2020 #worldbuilding #imagineotherwise #solidarityforever #solidarity #migrantjustice #refugeejustice #mcomalaysia #malaysiatrending

We stand in solidarity with every migrant workers, every refugees, every minors around the world who are facing this on a daily basis.#migranjugamanusia #refugeeswelcome #nooneisillegal pic.twitter.com/mrbtISuw7q

“Human rights are not reserved for citizens: they benefit everyone who is on a State’s territory or within its jurisdiction, without discrimination, whatever their administrative status and circumstances.” #MigranJugaManusia #MigranJugaManusia pic.twitter.com/rPhytxS17j

The only difference between "us" and "them"? We had a longer head start and way more space. Hopefully, our authorities and larger society will realise that conversation and creativity are the best materials to build a bridge across communities. #migranjugamanusia pic.twitter.com/smXe9jmf4d

Human rights are not conditional. There is no place for discrimination in Malaysia.#MigranJugaManusia pic.twitter.com/U9maRSvTgk

And finally, we also have a queer activist in Singapore lending his voice.

What drives us to speak out?

“I think it’s because we understand the pain that these refugees and migrants are going through right now being villainised and attacked by hateful elements in society simply for existing”, Nat, one of the queer protesters said.

We are no stranger to being the target of hate and disinformation. Recently, LGBTQ people were blamed for Covid-19 on viral social media posts.

Minorities are convenient scapegoats to direct blame and anger for complex issues, and the crackdown was simply a shock and awe tactic used to distract public attention, to signal that the government was ‘doing something’. It’s not the exact same, but it recalls how LGBTQ people are criminalised to vaguely prevent ‘moral panic’ just as much for ‘public health’.

No one is safe until all of us are safe

“We recognise that the intersections of oppressions that xenophobia against migrants and refugees are part of the same oppressive ideologies that allow homophobia, sexism, transphobia, racism to exist”, says Nicole, another protester.

Li expands, “The rhetoric behind their hate is the same [as ours], ‘X marginalised group should be grateful to even be tolerated here!”. She herself used to subscribe to a nationalistic ‘Malaysian first’ attitude earlier in life, which was informed by past experiences.

However, when she met a queer refugee, it opened Li’s mind to their struggles and realised it was unfair to pick and choose who deserves to get help on the basis of identity and stereotypes and she now supports the rights of migrants.

“For them to have decided to come to Malaysia of all places, their past must have been far far more terrifying. I suppose I feel more sympathy for them, that they thought they were going to find a better life only to be met with so much hate”, she reflects.

Where do we go from here?

As our journalists are investigated for reporting human rights abuses, it’s even more important to speak up. Our art and placards represent a glint of hope in a sea of hate. They serve as reminders of the hundreds of migrants locked up in detention centres right now, who are treated as less than human on the basis of their citizenship.

Our protests shed a light on larger forces that bear down on us all—the readiness we have as a nation to dehumanise and enact violence against each other—and how, at any moment, we could be at the receiving end of injustice.

We watch our government’s failures as they pick the easy way out and transfer the anger of Malaysians onto migrants who cannot defend themselves. As they are placed in unhygienic detention centres, where Covid-19 can spread uninhibited, it doesn’t take a queer person to ask, whose public health are we really protecting?

That’s the point, Sarah says, “One does not need [to be queer], to go through unbearable struggles to understand others who are suffering. It is just within human nature to care and empathise with others”. We’re here, not just because we’re queer, but because we’re human.