A flawed Imagination of Asia: The unnatural laws against LGBTQ people

In the words of iconic queer artist Frida Kahlo: “The most powerful art in life is to transform pain into a healing talisman. A butterfly is reborn, blossomed into a colourful party!”. Kahlo personified her misery in isolation on canvas and turned it into a source of healing.

As this seemingly endless quarantine take an emotional toll on us, Queer Lapis speaks to three unique queer artists in Malaysia who are turning their isolation into personal and communal therapy during the Movement Control Order (MCO) and into the “new normal”. 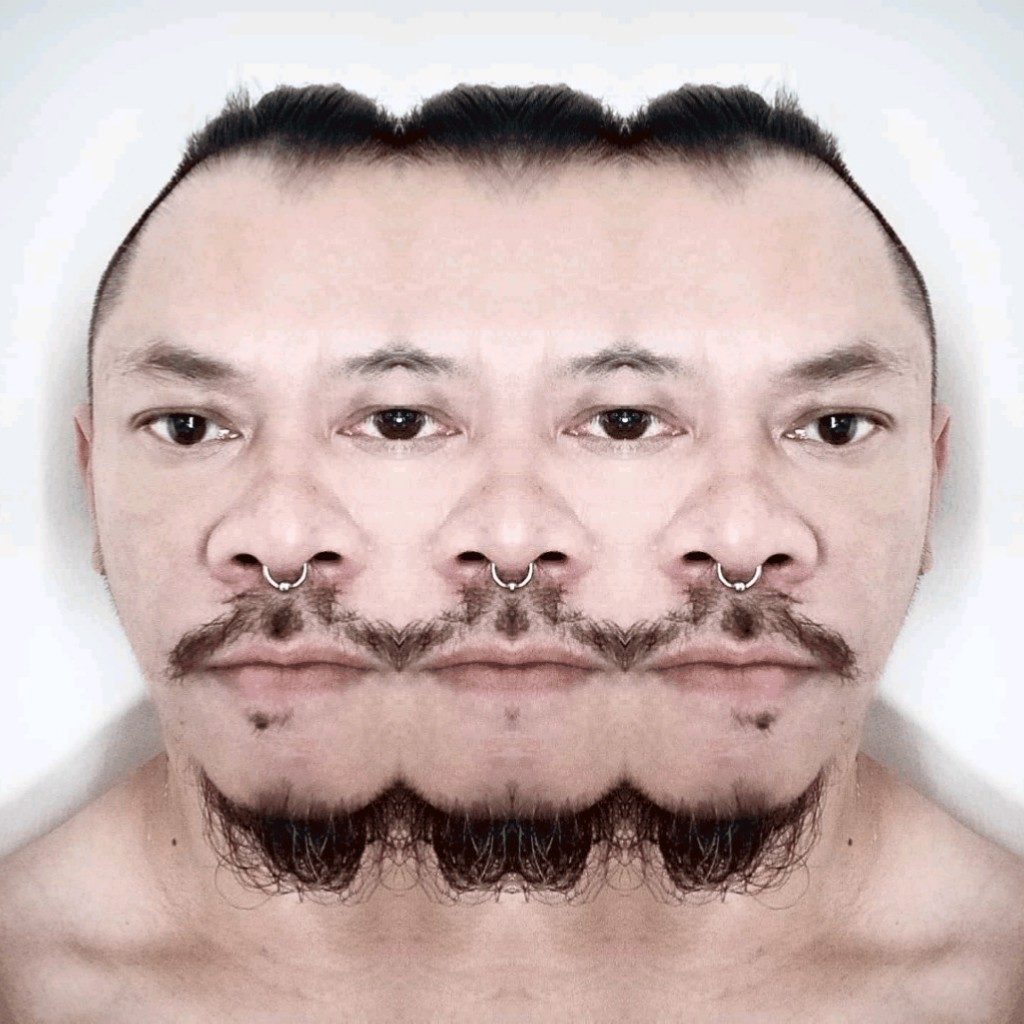 “I poured myself into it. It became my therapy for dealing with stress and the loss of self,” says Jerome Kugan, a multi-talented artist from Kota Kinabalu, Sabah, with creative writing, music production and visual art under his belt.

In 2008, Jerome became one of the co-founders of Seksualiti Merdeka when he was working at an art gallery. He later went on to set up queer parties like Rainbow Rojak. After he was fired for having HIV while working in another art gallery, painting became his retreat and also his queer resistance. Through it, he amplified his voice in order to dismantle what it means to be ‘queer’ in this day and age through the prism of art. Since then, Jerome’s journey navigating art has taken him through making talismans to painting abstraction, semi-abstraction, triptychs, and even boxers.

“Queer is meant to rebel, it doesn’t want to be contained. That for me is the crux of what I want to be in my art,” Jerome says, referring to the traditional boxes-on-a-page lens the cisgender gay movement perpetuated that marginalises trans communities and gender-fluid voices.

For Jerome, he creates art more for soul-searching and self-reflection purposes. “Art jams and online presentations of your work are great,” he says, “but we should be aware that social media has its own set of rules and algorithms that reward the culture of sensationalism and misinformation.” Rather than investing your creative energy to satisfy the desires of others, organise and keep art as therapy for yourself. That’s your dialogue with the world that is you, he adds. 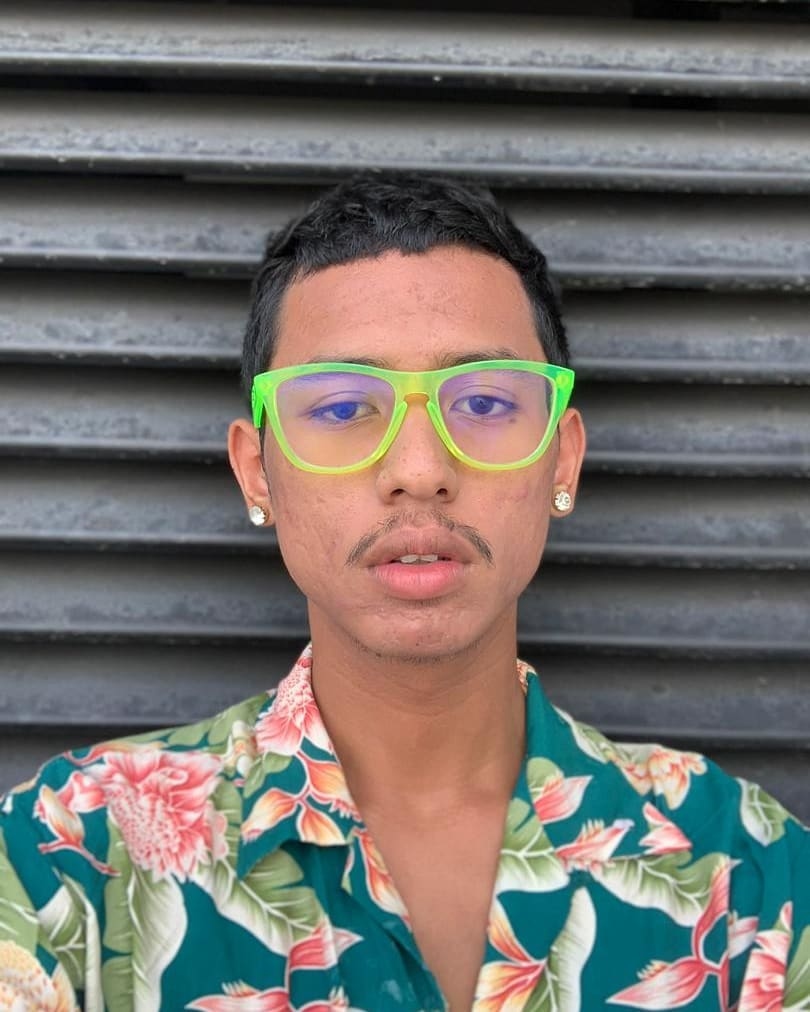 “The see-sawing state of your mental health, excessive stillness and finding your way back to stability are major hurdles impeding what we once knew as normal,” Adam Ummar says, a 24-year-old self-taught artist from KL.

“Ever since the lockdown came into effect, we’ve all been experiencing collective trauma and the one thing keeping me grounded is my art,” Adam says.

Adam has experienced the struggles of recently quitting a retail job, but it didn’t stop his determination to foster self-care and reimagine the new normal on a canvas. He is no stranger to change, having left Islam as a young teen and finding renewed faith and spiritual practice in pantheism.

Being in the thick of the internet world, Adam took advantage of his intractable relationship with social media. He has now worked with up-and-coming local artists through the support of The Art Seni to inform the community about creative pursuits and taking breaks from capitalist-fuelled notions of ‘productivity’.

He also produced a poster-painted piece titled Covinxiety at Zine Kita, a zine-making initiative by Cempaka Collective, an anarchist feminist collective, to demonstrate how one can, without beating yourself up about whether or not you’re Picasso level, express their emotions through intense colours.

The aim from the get-go has always been about reinforcing solidarity. “I do what I do,” Adam says, “because I’m here to build and maintain a community that has glued us together through common pursuits.” 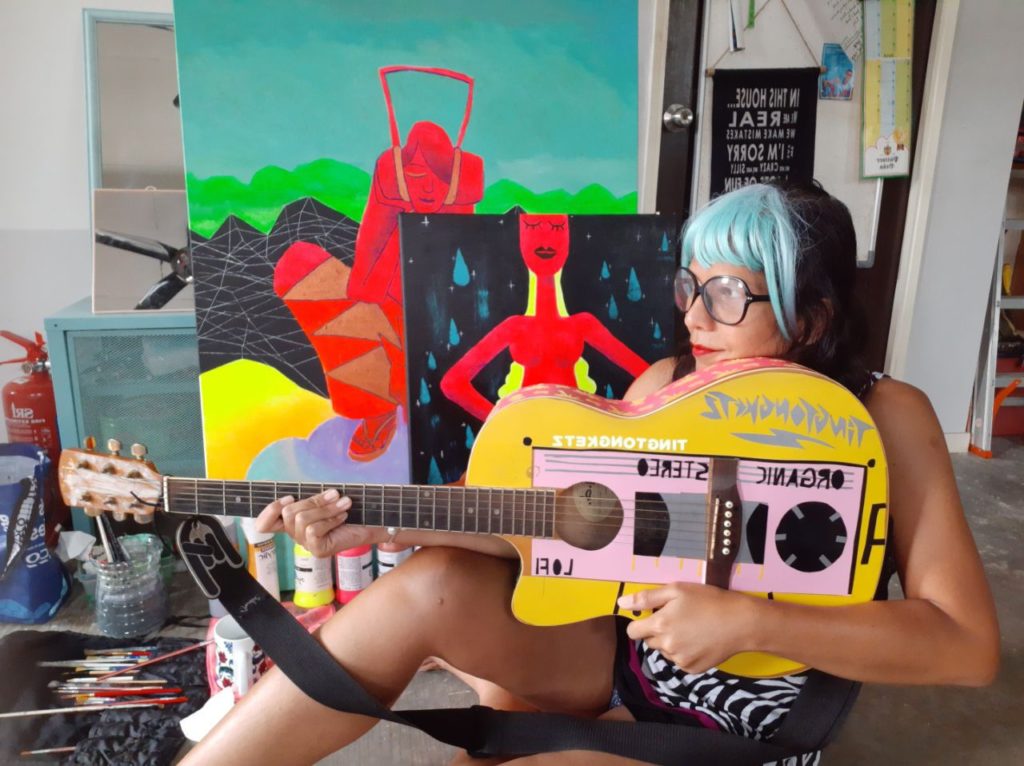 Shika was known as an established visual artist before spreading her wings into Malaysia’s indie music scene as the lead guitarist of TingTongKetz, a band which she describes as playing, “Hmmm maybe folk-garage-indie punk, something like that”. Her ability to combine her activism with her art began during the advent of Seksualiti Merdeka over a decade ago.

According to Shika, trans issues began to emerge in her art because she “developed a closeness with the trans community through Seksualiti Merdeka.”

A few years ago, however, Shika had to leave Malaysia. She travelled to Finland for an artist-in-residency programme called the Artists at Risk in hopes to seek refuge there because existing as trans in Malaysia is like “living in an open-air prison”. Now back again in KL, making art became the outlet not only for herself to reimagine activism but to practice big-picture thinking, especially in this extensive period of self-isolation.

“I think more about the mystery of life in general. How civilisation goes up and down and how we’re all fruit flies on the Earth’s timeline,” Shika reflects.

What’s more, she says, we’re all forced to spend more time with our thoughts and the uncertainty of universal stillness. So the time is ripe to collect yourself and spill onto a page. But Shika adds that sometimes, just doing small acts of waking up and drinking water is also enough.

Editor’s note: Shortly after this article was published, Adam also shared on how unfortunate it is that despite the creatives arts having tremendous restorative powers, the industry and its creatives are the hardest hit by Covid-19.

A huge number of creative workers are freelancers and do not have the same safety nets compared to other occupations. The mental and emotional health of artists and other creative workers are at great stake as well. Nothing is as detrimental to your daily mental health as constantly worrying about being able to pay rent and afford groceries. The arts will be one of the last sectors to bounce back once this Covid-19 pandemic subsides.

I hope that in times like these we continue to support the arts and artists to keep on creating. It is through the arts that society has time and time again seek refuge and meaning in a world that constantly shifts its boundaries and is never static, amorphous and eluding comprehension.

Support the arts and artists even if at the end of the day, the arts are treated as inconsequential and unimportant.

A flawed Imagination of Asia: The unnatural laws against LGBTQ people