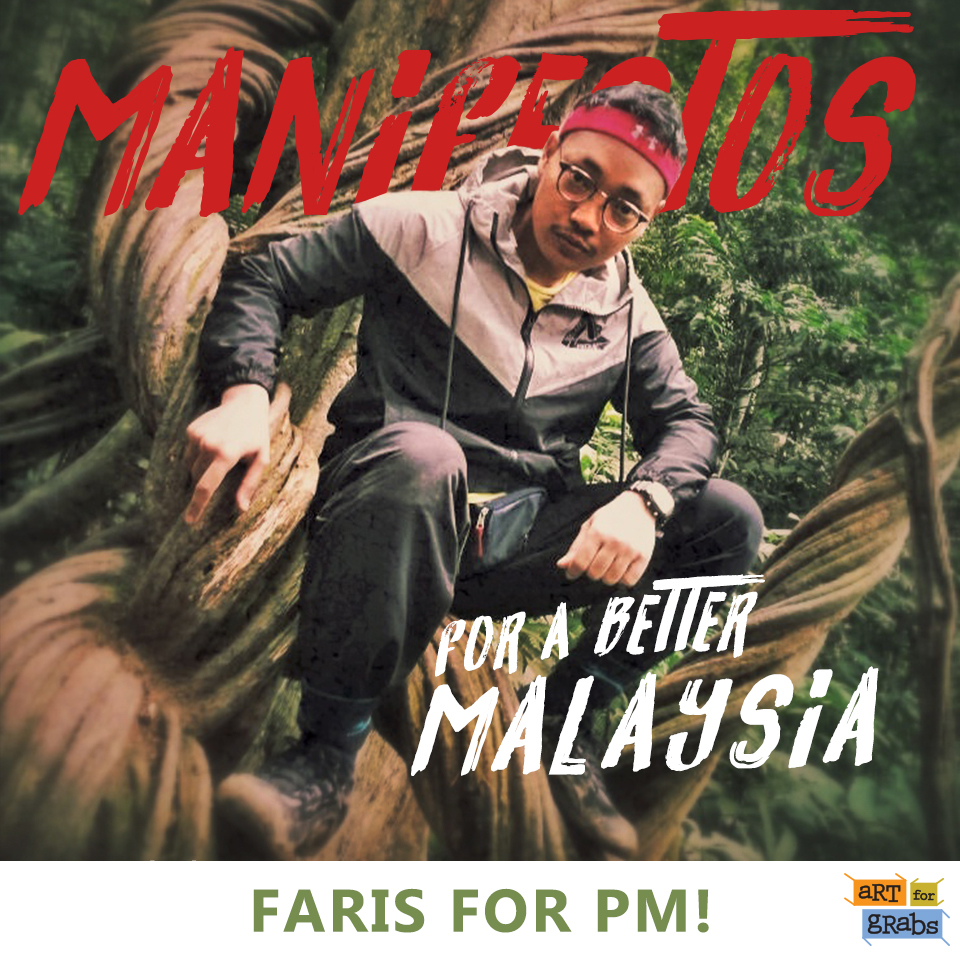 We asked Malaysians to imagine if they were running to be Prime Minister. This is rocker and journalist trans man Faris Saad’s manifesto:

As I’m sure most of you are aware, I’ve been Malaysia’s first transgender PM for some time. In fact there can’t be another first trans PM because I’m it. There is no second first.

It took a lot of death threats to get here, but I’m happy that we’ve gained the support and trust of a nation, and I hope we have served you well these past few years.

I represent Parti Sukahati. Our slogan is Parti Sampai Pagi, and damn right we’ve done that.

As a nation, we’ve gone through great strides to be where we are today.

Other than fantastic economic growth, more schools, graphs charts whatever, the past few years have been amazing. I’d like to highlight some of the changes.

We’ve grown to become a more open and accepting nation, successful not only in terms of economic development, but also in how we treat each other.

The Federal Constitution is now truly for the people, and guarantees freedom of worship as long as it does not harm the rights of others. Religion and belief, or lack thereof, is personal, and we protect your right to keep it so.

Crimes against LGBT people have decreased significantly, by an amazing 89%, nationwide largely due to a massive overhaul of our education system, which includes a mandatory sex education programme.

All schools have a compulsory sex education programme which addresses gender and sexual orientation. The number of teenage pregnancies and abandoned babies has dropped by 56% and 62%, respectively, over the last five years.

If you are transgender, public medical facilities will help you in your transitional journey. Your legal documents will reflect your gender identity.

Your workplace can no longer discriminate based on sexual orientation or gender identity, ethnicity, religion, or if you are differently-abled.

I am overjoyed to say it is no longer illegal for you to be in a loving and supportive relationship if you are the same sex. Same sex couples can adopt and have the same rights as heterosexual couples, under Malaysian law. The sexytime part is also no longer illegal.

After much debate and work at grassroots level, sex work has been legalised, under certain conditions. Because we can get tax money from this, sex workers can get access to free medical care and are also covered under SOCSO. In the three years since sex work was legalised, the number of HIV infections has declined by 45%. The number of tourists we’ve welcomed has increased 35%.

How did we achieve all of this? We allocated financial resources accordingly.

To free up funds of around RM1 bil a year, we abolished JAKIM, which means no more raids in your homes and no more rounding up and shaming of people who are not fasting, and no more arrests of people sitting together in the park. JAKIM has been reformed as Jabatan Penasihat Agama-agama Malaysia (JAPEMA), with representatives from every major religion in the country playing a role in the well-being of Malaysian citizens.

Marijuana tax also helps make money. Good citizens of Malaysia, we made marijuana one of our major export crops, because it’s legal and good and makes a lot of money. Last year we exported 2.8 million tonnes of home grown herb to the world (parts where weed is legal). Medical marijuana is a fast-growing industry with funding from the government for SMEs in the marijuana value chain. Malaysian weed is ranked among the world’s finest.

A pleasant effect of the legalisation of marijuana for medical and recreational purposes is the decline in the number of our prison population by 20% in the last five years. This means prisons are less cramped, and we can afford to give our institutionalised citizens things like real beds and actual food. Our law enforcement officers also have a bit of the weight lifted off their shoulders since they no longer have to arrest every Tom, Dick and Harry with a joint. The tax money from weed goes back into their salaries, which we raised by 20% to thank them for keeping us safe. And to help prevent bribery.

My only regret is we should have done this much, much sooner. Many lives have been lost in this struggle to get where we are today, and it is for our fallen heroes and our children that I dedicate the future of our nation.

So, thank you for making Malaysia a home.