By HALI MUNAN. This story is the 2nd part to “A Girl Called Abang”. 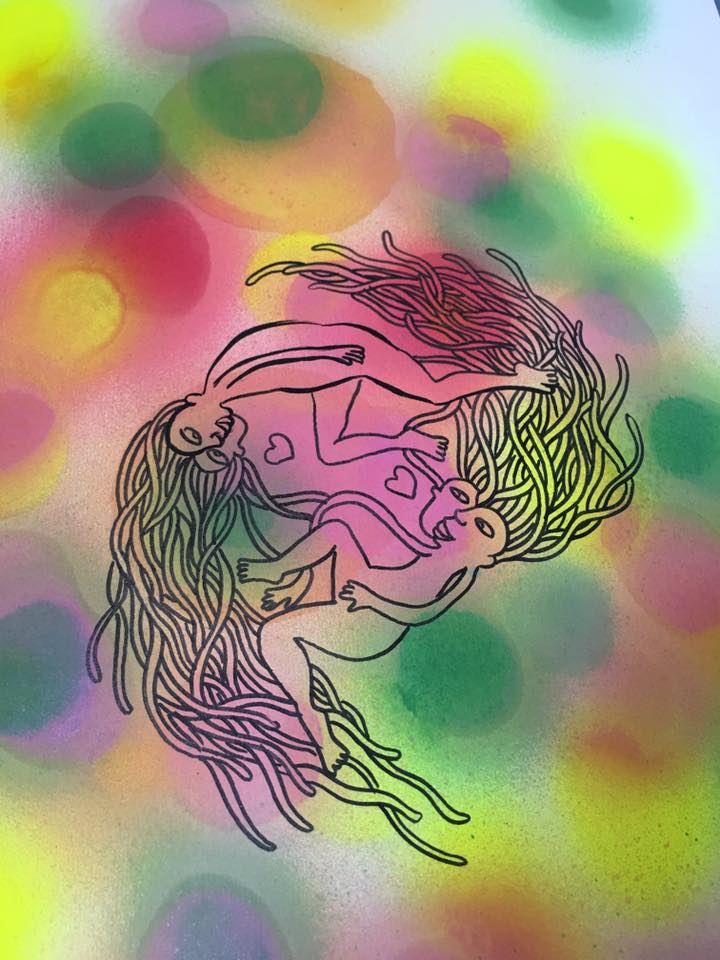 A person wanted to transcend binaries, and then the internet arrived.

What the hell was this body-less world I could unlock in a box plugged to my wall? The warning was you never know who’s on the other side, but that wasn’t scary, it was fucking thrilling. Finally, a place where I could talk to people without worrying about the body I was packaged in, how I would be seen, or even what others looked like. We could just surprise each other with what we had inside us.

I met my first boyfriend on a social network. I had never met someone I liked and felt confident it was mutual, but I did with him because we talked so much before meeting. He fussed over his hair a lot, kept his Sex & The City boxset on him always, and said he loved all the inside bits of me that people didn’t see. It was good, until it really wasn’t.

Nobody from school recognised me by then; my hair was long, I was definitely coded as woman all the time, people treated me kindly and wanted to know more about me for no reason. For the first time ever, I didn’t have to convince people to want me. I had options. I only liked a band boy when I discovered his huge crush on Shane from the L Word (also my favourite). One night, he whispered through cheeks full of shame, “When I’m tipsy, I like kissing other guys.” What! I liked him even more. We checked out andro-masculine women together, wore each other’s T-shirts, and wrestled breathlessly in bed.

I didn’t call myself queer yet then, but maybe because I intuited that not being straight would make his (straight) friends like me less. I held the same suspicion when I started dating women too, that their (lesbian) friends distrusted a femme they couldn’t call gay, a person who could be attracted to ‘anyone’, and therefore ‘switch back’ to the ‘other side.’

But what if my body mattered very little to me in general, let alone in the process of identifying my ideal? I spent my whole life wanting love despite my body, not based on it. Where would I fit in?

Too difficult to love

I saw more bisexual femmes showing up in movies, TV shows, and books, I saw them getting the femme women that other men wanted, or the masc men that other women wanted. But this didn’t help me at all. Bisexual people were framed as unreliable precisely because of this capacity to love in this kind of binary way. It would be far more relaxing, I’ve been told, to date someone ‘definitely’ lesbian or straight, someone more ‘sure’ of what they were ‘really’ into. Being myself complicated things for everyone, and it made me feel too difficult to love. A woman I dated once jokingly called me a secret man. For awhile, I wondered if she was right. I remembered how easy it was for me to go along with my father’s plans for the boy he wanted me to be until my body got in the way. But he did it from a place of narcissism, not from some woke desire for me to be part of the gender revolution.

Yet there I was, wanting so badly to locate myself in it. School was out over ten years ago, and the internet I once found so freeing was now full of beautiful binary bodies like everywhere else. I began Googling and Youtubing everything I could about trans people, wondering if I was one myself. I related to much of it, but I’m not trans. What came next was more surprising.

When I started meeting people again, things were different. A one-time date with a tender Disney prince from OKCupid lead to a trans woman confession months later. “You were the first person I wanted to tell, I don’t know why.” I met an andro babe in a crowd of queer women. Eyes packing a gaze I could drink, purring at my voice, and drunkenly complaining about always falling for straight women. “That’s such a lesbian cliche,” I laughed. The response was immediate: “But I’m not. A lesbian. Ohmygod don’t say anything please.” “Oh,” I said, piecing things together. I hung out all night hoping for a kiss anyway. The slip wasn’t a dealbreaker, could I make it clear somehow? It didn’t happen. We followed each other online, but never saw each other again.

Radically redefine just for us

I met a 99% match so beautiful I couldn’t believe he was into me. Aren’t boys this pretty and soft always gay? They never like femmes like me back. And then: What if I’m not femme enough? I was so not femme enough. In fact, this person compelled in me a gentleman I had never manifested before. But when I said “You’re so pretty,” their eyes fluttered shy. We went on more dates: swapping tops at public restrooms, going lingerie shopping together for something floral and lacy to wear. I gifted a dress to take off. Emboldened, they wanted me the way I thought no one would ever tolerate of me — firm, infinite, growling. The next time I called them pretty, they came. I felt as exposed as a raw nerve. Both of us had no idea the other person was possible. It was hard to tell who was more excited about being seen.

One by one, people I met and mutually found attractive came out as trans along the way, either a long-held secret or an awakening. Sometimes it was a reaction to me asking for pronouns, what it was like to know any answer wouldn’t compromise our attraction. Some expressed relief that them reconsidering their label didn’t mean I was reconsidering mine. “I really don’t need to,” I said. It was a lightbulb moment: Oh wow. Being bisexual is pretty cool.

I had been focusing too much on how the femmeness I performed in my queerness was failing binary expectations in both straight and gay relationships. What I didn’t realise was that my fluidity was not only something I should be proud of, but also a potential source of mutual relief. It could be needed, not just something to negotiate through.

And I already found fluidity attractive in anyone. It wasn’t just presentation. I believed who they were simply because they believed themselves. I didn’t need to ask my body for a second opinion, my body wanted them as they wanted me. With every person, rules are torn down and rebuilt from scratch, so we could radically redefine just for us what pleasure is where we’re at, from kinks to asexuality. What would any combination of us look like when we’re comfortable, curious, and warm?

This was never a story about finding my label. It’s about the joy I found in transmuting that energy into something else. I would have never been happy wondering if I was enough for partners and friends who ultimately wanted a person more fixed, or to ferment my fluidity into fickleness. I was my fullest when channeling it into making intimacy a space that recreated how the internet first made me feel. We could surprise each other with what we had inside us, and then celebrate it. I get so angry thinking how people before me made it so hard for the people I met to imagine someone they liked who also found them easy to be with. I wonder if they thought the same for me too.

Positive mainstream portrayals and narratives of trans people are few and far between, and still crudely binary. Of course this fails trans people, but it also fails diverse people like me. When it becomes hard for trans people to imagine even being safe as who they are and where they’re at, it follows that love and the greater imagination of non-binary romance is also erased. I wish it was possible for me to know sooner that love in liminal spaces could be so magical and fulfilling. I wish erased people knew sooner that many people exist out there ready to be smitten and kiss them all day in any version of themselves. That I am not some exception.

The discourse around trans people is repeatedly one of tolerance and acceptance. We rarely show them anyone who wants to love them beyond physical fetish. So many old friends can’t accept a new name. Strangers won’t even let you pee in the toilet. I fight them all. It’s easy when the one I stand up for has affection for me that infuses me with courage. Affection so generous that it’s striking to think once upon a time we did not know each other, did not think it was possible to find people who did not exist, and that we were once shamed out of knowing we deserved to be loved in our truth. As if we didn’t already know the world doesn’t want queer people out here being happy.

“I’m going to write a thing,” I say to the pretty girl I gave a dress to years ago. We said hi to each other at the bar. “I want to talk about what being bi means to me, but what I really want to say is we need so many more trans love stories out there.” She’s in her girlfriend’s skirt, finally transitioning, picking out her new name. “Do it,” she says, “you made that space for me. Make the space for you, so people can see what’s possible out there,” she says. Her eyes light up her face. I almost say: God, you’re always going to be beautiful. We smile at each other, deep in the heart of the gender revolution.

Hali Munan is a pseudonym. This story is the 2nd part to “A Girl Called Abang”.