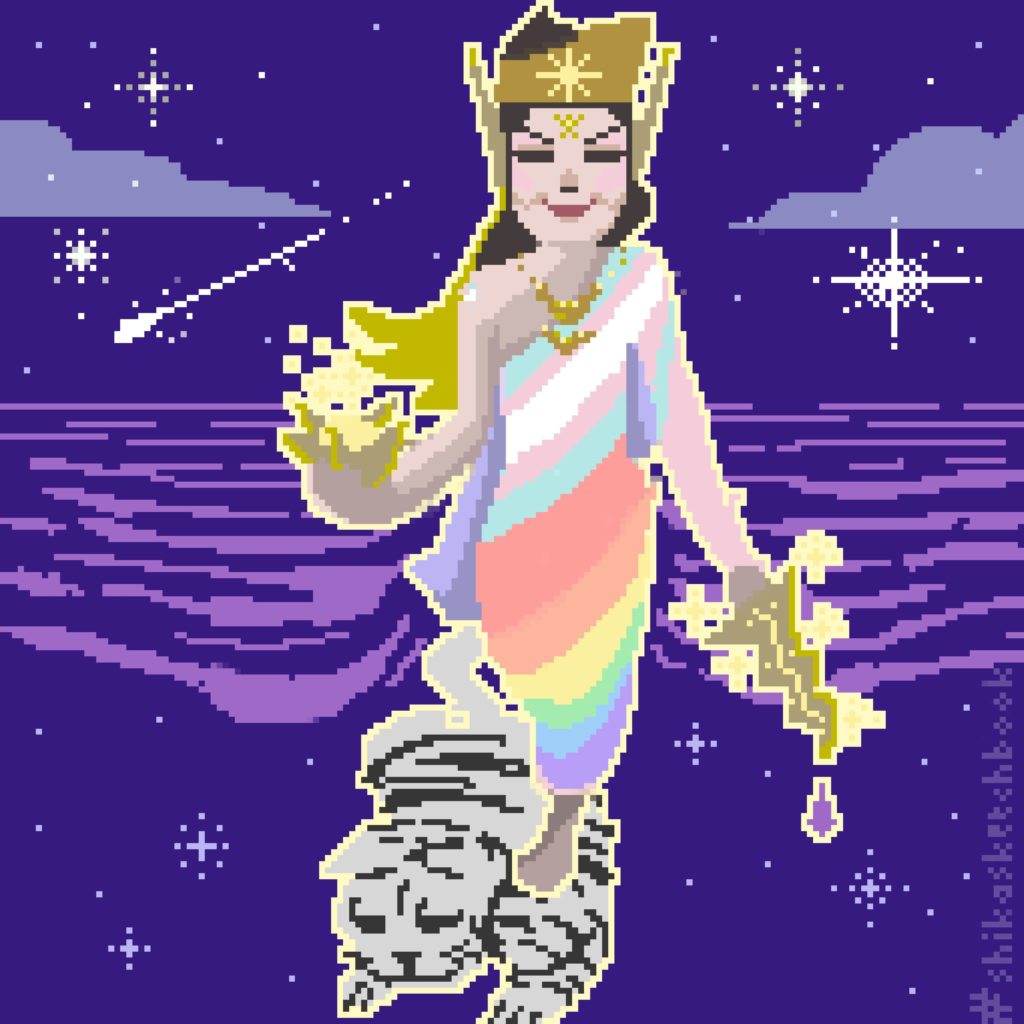 In the night you are dreaming, and in your dream you see someone come out of the sea. They come in glory.

They ride a low wave and alight on the shore. A crack, like glass breaking, when their toe touches sand. Their eyes are shut. Their cheeks are rosy. Their lips curl slight, seeming to smile.

In their right hand: a whole pomelo, skin almost yellow, peeled open like a lotus blossom, the flesh pink and nearly bursting;

In their left hand: a keris, blade down, dripping.

Their eyes are shut. Their coat is as satin, and ripple-simmers – a bleeding riot of colours: cherry, coral, gold, grass, sea-blue, plum. Sunshine.

You try to hide behind a boulder on the beach. Their eyes are shut. But you sense you have not left their sight. They see through the stone, and they see through you. There is a star on their brow. It glows like a neon sign of a shop, at night.

The next morning you find yourself unable to concentrate.

You forget the handbrake, so the car you are working on slides backwards, down the workshop’s incline – you chase and pull it to a stop before it slides onto the curve of the roundabout.

Lunchtime at Soon Heng Coffeeshop is unusually subdued. You sit alone, absently spooning soup. Wholesaler Sim and his brother sit at the table next to yours. They eat in silence. And then:

“Me and Ah Girl had a dream, last night,” Wholesaler Sim says.

“A dream? Me too!” his brother replies.

There is a collective skrrr-retch from the floor as a dozen plastic chairs are turned around, in unison.

“Did you dream about an old man?” Wholesaler Sim asks his brother.

It is Taukeh’s Wife Kim who raises her arm and answers: “I did!”

“A star on his forehead,” Softy Khoo says.

“He is a datuk,” Wholesale Sim’s brother answers.

“A datuk,” Taukeh’s Wife Kim says. “An admiral. Like the one under the tree, at the roundabout.”

“Clothes the colour of the rainbow,” Softy Khoo says.

Auntie Hong slaps her hand on the table – crack! – a smack that rattles the spoon in your glass of iced barley. “You young people,” she says. “Useless! We already had the dream. Meaning, no choice already! You want the god to be angry?”

“What do we do?” asks Taukeh’s Wife Kim.

“Cannot be helped already,” Auntie Hong says. “Must go and make the god.”

The factory waiting room has air-conditioning and faux-leather settees. You stand. The walls are covered with photographs – the god maker posing with priests, government ministers.

“Welcome, welcome,” the god maker says. He is a plump man. Slick-oiled hair. A cellphone clipped to his belt.

He points at a price list. “Nowadays, fibreglass is standard. We have many packages. If yours is a new god I recommend Golden Premium.” He points. “Basic level. And then in a year or two, take the Fortune Premium upgrade package.” He points again.

The god maker pulls out a form. “Okay, so. Male or female?”

The god maker looks at one, then the other. “Well,” he says, looking at Softy Khoo. “We do make male-female ones, split vertically down the middle. But that one is in our Hindu range.” He looks at Taukeh’s Wife Kim. “Slightly more expensive.”

“Standing?” the god maker asks, and you all nod. “Stepping on?”

“And a star on the forehead,” Sister Chin says.

The god maker nods, taking notes. “Okay, now, painting. Usually this depends on race. If the god is very Malay, then we paint the clothes green. If Indian, we paint the skin black.”

“Clothes must be painted like a rainbow colour,” Softy Khoo says.

“Nowadays rainbows are quite controversial,” he says.

“Has to be a rainbow colour,” you say.

“But not just rainbow colours,” Softy Khoo says. “His clothes also need to have light blue and pink and white lines.”

The others nod, agreeing. Wholesaler Sim’s brother says: “See? No problem. Adding pink and white means it has nothing to do with the LGBT thing. This is a totally different thing!”

In the week after the new god arrives, your workshop gets three visitors.

The first is Uncle Rawa. He sputters up the incline. His engine dies. “My bike,” he says. “Difficulty starting.”

As you detach the spark plug Uncle Rawa lights a cigarette. He waves it at the street, at the fig tree filtering six-o’clock light coming from off the horizon, at the freshly-painted shrine. “Pink. Nice colour. You all just did it?”

You wipe your hand on a sleeve and nod.

“Got a new statue inside?” he asks. You nod.

Uncle Rawa sucks in air and smoke. He comes from across the bridge, from the Malay village. He is a type of shaman, people tell you. Sometimes, he travels into the city; rich people pay him to keep away rain.

“They are guardians,” he says, exhaling. “They keep the soil and the water. Of course, now, we don’t mess with them any more. Not supposed to. It’s wrong, religion-wise. It’s all superstition. Nonsense.”

You blow through the fuel-tank vent more forcefully than you need to.

“My neighbours tell me they have been having dreams,” you hear Uncle Rawa say. You sit up to look at him. He ashes, and watches the sun setting.

You start the bike, twist the throttle; the engine roars then grumbles. “The vent was getting clogged,” you say. “No more problem.”

“Thank you,” Uncle Rawa says. “For painting the colours.”

The second visitor drives a luxury mini – never before encountered, here, so some of the local boys stop to gawk.

The driver is a man in sunglasses. “On a road trip, driving trunk roads down the Peninsula. Good luck all the way. Then, today, flat tyre.”

She has wandered across the street, into the shade of the tree. They inspect the shrine – the oranges and betel nuts and the palm-leaf cigarettes; the beef rendang Sister Chin left under a red plastic food cover, against flies.

They pose with the shrine, three seconds still for his phone camera. And then – “Now again, just me,” he says. He stands in front of the altar, claps his head between his two hands, mouth frozen open in a look of mock-surprise.

You see his face again, two days later, on social media, in a post shared by the Oriental Press. His eyes are round, his teeth white. Behind him is the shrine’s new god, bright with new colour.

The small counter at the bottom right corner tells you his post has 17.4K shares.

The third visitor is a reporter from the Oriental Press: glasses, wide smile designed to disarm; quick-stepping, press tag out; hungry-looking.

But her colleague is older,  maybe quicker to sniff out vulnerable targets. Because there he goes, trotting after Softy Khoo, who is trying to get away. “No comment,” Softy Khoo says.

“Mister, what is your response to people saying that this is the one of the covert strategies LGBT groups use to promote their lifestyle, their agenda?”

“Mister, what is your response?”

“Don’t disturb him, you understand?” Taukeh’s Wife Kim says. “Ask me! I have a response. My response is this. Nobody here has anything to do with LGBT groups. With gay-gays. Okay?”

The reporter from the Oriental Press has his notebook out. His colleague runs over, her camera set to record. Both are trained on Taukeh’s Wife Kim.

She is screaming, loud as only taukeh’s wives can get. “Those people don’t know what they are talking about,” she says. “This is our place. Our god. Go away! Leave us alone! Don’t come here, making these accusations!”

Softy Khoo is true to his nickname. Afterwards you find him sitting on a step in the back alley, crying. You sit beside him.

You wait. Gradually, sniffing, hiccuping, he stops. “It’s not so bad,” you say.

“It will get worse,” he says. And you don’t know what to say to that, so you put your arm around his shoulder.

That night, Softy Khoo snoring beside you, finally you fall asleep. And you dream. In your dream you see someone come out of the sea.

They come in glory. Their coat is satin: billowy sails, gourami’s fins, a flag. Ruby and tangerine, saffron and jade, azure and amaranthine.

A white star, glowing. Their eyes are shut. Their lips are ruby. Cheeks full, blowing the whipping wind. Surfing a tidal wave to smash the shore. A crash, like tree-shattering lightning. The sand turns solid. Cracked concrete.

Their eyes are shut. You sense their attention, piercing through you. This time, you cannot cower. What would be the point? You step out, from behind the boulder. You bow. Fall to your knees.

In their right hand: a single egg, see-through like a heated cannonball, swirling with molten matter;

In their left hand: a keris, blade down, gory.

You lift your chin. They touch the tip of their blade to your forehead. It burns, their dagger. You feel pride, approval. Piercing anger. Tenderness. Fierce tenderness.

This piece of fiction is an interpretation of a real dream related to the writer by Sharon Chin. Check out Shika’s drawings and Zed’s writings.