Daulat has been making waves on Malaysian social media as one of the best local films of all time. But is this true?

Two queer writers, Deric Ee and Veshalini Naidu give two strong and opposing views on the film to cut through all the hype. Warning: Some spoilers ahead.

“A Small Triumph for Malaysian Filmmaking, But a Triumph Regardless”

There is a boldness in Daulat’s portrayal of Malaysian politics, and it might be the most daring film made locally. Certain scenes were so risque (there is a certain ball-grabbing scene we shall not spoil) that Malaysia’s notoriously conservative film censorship board refused to approve the film for standard release.

Nevertheless, director Imran Sheik managed to find it a home on streaming platform iFlix where it is available in its full glory. With media laws that state ‘evil deeds’ in cinema can only be depicted if accompanied by repercussions, this has the power to make or break a film. Thankfully, we see a character coded as gay who doesn’t have to ‘repent or die’.

Daulat’s plot reads more like a news article post-GE14 by opening with an election loss: Malay nationalist party MUNA, whose president is weighed down by corruption charges, is defeated by their opponent, WAWASAN. What follows is a figurative game of chess as MUNA tries to regain control of the country. Vanidah Imran’s character, Suri, the deputy president of MUNA plays hard and dirty, pushing for a coalition with Islamists and liberals while sowing discord in the opposition’s camp through her husband’s (Rashidi Ishak) news organisation.

The possibilities of streaming have truly freed local filmmakers from the rut of censorship. Suri is in an open relationship with her husband because true love is not concerned with possession. The political parties⁠—MUNA and WAWASAN⁠—mirror the real-life relationship between UMNO and Keadilan. Most refreshing of all is how politics is stripped of its pretence and is shown nakedly, as a game of power and control among the ruling class, where the rakyat’s needs come second.

– A malaysian (wow) thrilling political movie
– “Let your plan be dark as night but when fall like a thunder”
– KAU TENGOK LINEUP PUN DAH TAHU ACTING ?
– When you understand most of the references they used… ehek
– Satu je, kenapa nama parti dia MUNA ? pic.twitter.com/QPwSJvv2rz

Compare this with Yasu Tanaka’s Nota (2016), a deliciously dark tale of a woman who murders her cheating husband during their holiday in Sarawak. When Nota premiered at the Cannes Film Market, it concluded with protagonist Erin (Maya Karin) escaping police detection and exacting revenge on her husband’s mistress. In the Malaysian release, Erin gets put in jail, leaving audiences with neither suspense nor twist, and leaving FINAS with another box office bomb.

Despite the creative freedom given to director Imran Sheik, there is a sense he never fully takes advantage of this. It checks all of the boxes of a typical ‘bad movie’: Over-dramatic performances? Check. Expository dialogue? Simply too many. Problematic representation? Women and queer characters are annoyingly stereotypical.

Flawed in terms of writing and performance, the film plods through its first act with undercooked lines and pantomime villainy. Even as its story peaks, there’s a noticeable lack of nuance on the screen. Missed opportunities in terms of direction and cinematography result in moments ending flatter than they should—a week or two in the workshop would have strengthened the script.

But for all its weaknesses, Daulat remains a rare and thrilling piece of filmmaking. This feels vital given that nations around the world are gravitating towards demagogues and populist rhetoric, nurturing mobs. Now is the time to have Malaysian faces in a Machiavellian universe and to provide a counterpoint to propaganda.

“Daulat Is a Malaysian House of Cards: As Weak as Paper”

Daulat is the promise that Malaysian cinema has the means and the talent to do well aesthetically, but will continue to be blind in its portrayal and treatment of women and queer characters, even when uncensored.

Women are given the chance to climb the ranks in traditionally male-dominated politics. And yet, this cannot be imagined without excessive and unnecessary violence on them, and the use of LGBTQIA+ as scapegoats for political games. They are abused, used, reduced and in one particular and uncalled for scene, literally choked, by men in power, and none of these acts are ever confronted.

The main character, Suri, is present for most of the film but we learn nothing about her. We don’t understand why she wants power, what her goals are, why she is here. We spend most of the time seeing other (mostly male) character’s stories fleshed out, but not hers.

Suri could have made a strong example of the quiet acts of revolution that most Asian womxn practise, which is different and more understated compared to Western conversations about feminist actions. Where silence is the arsenal for self-defence. We never got to witness any of it. The writers failed Suri and other females in this movie even when they tried to envision powerful women, because they used a patriarchal lens.

There is a Najib-esque character, however, who is glorified to no end. The movie isn’t about him but he somehow finds a way to steal so much screen time. There are moments where it even feels we are being asked to empathise with his character. A man, who stole from the people for his own greed, is sexist and racist and has no qualms with murder. Yet, he is always dignified. Given our political history, to be asked to empathise with such a man feels rude. 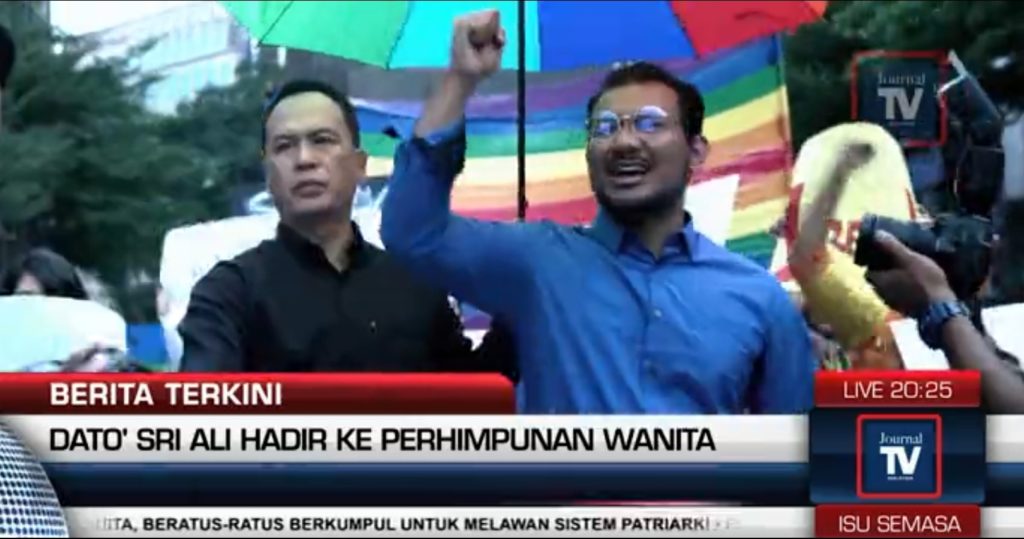 In probably one of the first local films to portray a pride flag, it is sad to see it weaponised. This happens when one of the politicians is filmed at being at a Women’s March and behind him is a huuuge Pride flag. This was used by his opponents to pin him as an LGBTQ supporter, to which he gets defensive and challenges his rival to a… debate? Watching identities be used as conflict markers is not just painful, it is also lazy writing.

There is also a very flamboyant character who plays the Gay Best Friend™. He is an entertainment journalist (obvs). He has no reason to be in this story, other than to be the funny gay guy. Except it becomes immensely clear that the humour is in his mannerism and not that he’s actually funny.

I am not your Indian 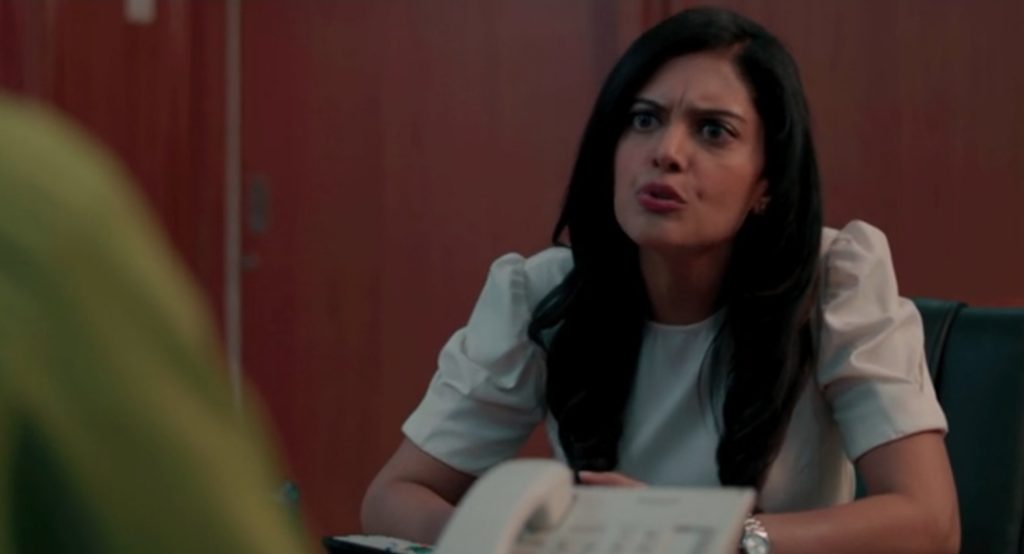 Melissa is your conventional angry Indian woman trope. Don’t get me wrong. We Indian womxn have a lot to be angry about. What upsets me is this film teases an opportunity to finally peel back the layers and dive into what angers us, explore why someone like Melissa is so important to us in politics, why she is in politics, but it never goes there. We watch her confront her conservative Muslim colleague over his racist remarks and no one comes to her defence. We watch her repeat the same losing battle every Indian person has when it comes to race in this country.

When she is off-screen, she is referred to as “perempuan India tu” with so much familiar bitterness. When she was justifiably angry, she was silenced. And when she was silent, she was dehumanised. She was not crucial to the events to the story. Remove her, and the storyline continues. She was a character created for conflict, the same way the Pride flag (so large that it covers the TV screen) features in the Women’s March.

Who is Daulat for?

As I write these notes, I keep thinking about dramaturgy. When they made this film, did they speak to women and minorities? What were they trying to say? Who was this film for? Because I know it was not for me or my identities. And perhaps if these questions were clarified in the writing of this film, we might have seen something much fuller.

Daulat is a Malaysian House of Cards in that it is as weak as paper. If you told me this was an edited version because of FINAS I might have been kinder. But it is not. This is how these filmmakers see this country and the people in it at this very moment. What we create has the habit of capturing ourselves in real-time. I have hope that as they grow, so will their ideas and become more mindful and inclusive. We can do better. We must do better.

Deric Ee is a writer, curator and arts manager from Seremban who is heavily invested in local and international pop culture.

Veshalini Naidu is a multidisciplinary artist who merges visual arts, poetry and theatre in their response to race, gender and sexuality in Malaysia.