One Trans Woman’s Battle Against a Corporate Union-buster 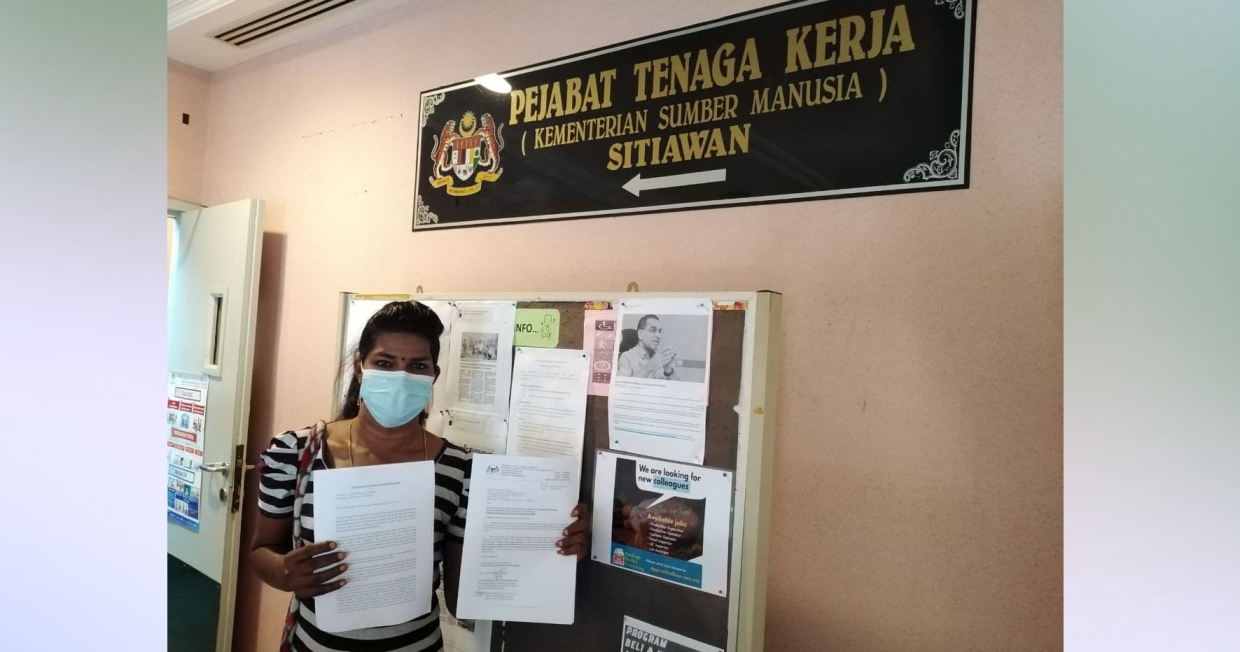 Tharani is fighting a battle against a corporate giant. The odds are stacked against her but she keeps fighting, in hopes that her voice will be heard and her actions will inspire other trans women to stand up for their rights too.

She’s caught between a rock and a hard place. Her employer, Edgenta UEMS Sdn Bhd, a subsidiary of UEM Edgenta Bhd, is making it difficult for her to perform her duties as a hospital frontliner. The constant changes in policy and pressure from the management to conform to unfair terms have caused her a lot of pain, driving her to attempt suicide.

If she continues her fight and wins, she fears her employer might still pressure her to leave. If she loses, she will end up with nothing to show for the suffering she has had to endure. The big guys win and it’s just business as usual for them, but for an everyday Malaysian like Tharani, it is her livelihood.

This isn’t just a story of a trans woman fighting for her rights; it’s a story of how large corporations deliberately dismantle unions that have long stood up for the rights of folks like you and me. These corporations have sustainability statements claiming “responsible business practices”, but who actually holds them accountable when they fail to enforce their own standards?

Born and raised in the estates of Seri Manjung, Perak, Tharani’s father passed away six years ago, leaving her as the sole breadwinner of the family. She worked at a poultry processing plant before finding work as a cleaner at Pantai Hospital, eventually ending up at Hospital Seri Manjung in 2019.

She was hired to work at Hospital Seri Manjung by NS Medik Sdn Bhd, a subcontractor. During the hiring process, she informed her future employer that she was transgender, and there was no issue. They had a few other trans women on staff, too. She was allowed to wear feminine clothing. Eight-hour shifts were clearly outlined, along with 15 days of public holiday a year. There were a few minor issues that Tharani was able to raise with her employer with the help of the union, of which she was a member.

She says the management of NS Medik held regular meetings with staff and the National Union of Workers in Hospital Support and Allied Service (NUWHSAS) representatives to discuss and improve working conditions and pay.

Tharani worked diligently, proud that she was able to support her elderly mother and happy to be of service to the hospital and the public. Thanks to the union, she felt heard and appreciated. Things were good.

That began to change when, in August 2019, Tharani and her colleagues were informed of a change in management. NS Medik’s contract was due to expire and a new company would take over officially in January. They were told that they did not need to sign new contracts with the new management and would be absorbed.

Edgenta UEMS and its fight against rights

“There was a woman from the new management who told me that I would not be able to wear feminine clothing or jewellery. She told me to change,” says Tharani.

Emboldened by what they saw as approval from the new management, and perhaps eager to please, other staff members began to join in with the mistreatment, giving her problems, and calling her names.

Not only was the company condoning this transphobic behaviour; Tharani’s identity as a trans woman was used against her. The new management pressured her supervisor to order her to remove her earrings, nose ring and necklace—items that were deemed feminine. She was even told to cut her hair before January 1 and conform to the male dress code, or face termination. She questioned the order and was reprimanded for insubordination.

Edgenta UEMS came in with new contracts to sign. “We read the contracts and there were several changes that we did not agree with. There were 10 of us who approached the management to contest the new terms. I asked why we had to sign new contracts when we were told we would just be absorbed,” she says.

Unfortunately, there were moles among her colleagues who would report whatever plans Tharani and her fellow union members had planned. Those who supported her were harassed with calls from the management and were pressured to change their minds.

In December when the company produced a list of employees, Tharani and the 10 who contested the new terms found they were left out.

Despite Tharani’s attempts to rally support, most of her colleagues ended up signing the new contracts anyway. Of the 10 that voiced their concerns, three resigned and the rest signed, fearing losing their jobs. Three other trans women who had previously supported Tharani resigned, unable to cope with the constant pressure and harassment from the management.

The management continued to make decisions without consulting union members with the excuse that the union was no longer valid under the new management.

Close to defeat, until help arrived

One by one, Tharani’s fellow union members resigned after refusing to be transferred. The management wanted to break up the union so their employees would be powerless. They accused her of being influenced by the union, but she maintained her position. “We need a union to help us if we have problems with anything. A union helps protect our rights,” she says.

It was not until NUWHSAS executive secretary M. Sarasvathy and official L. Danaletchumi that she met Parti Sosialis Malaysia central committee member Chong Yee Shan, who would help her win one battle in her war against a giant. These people knew the track record of Edgenta UEMS and their anti-union behaviour, after supporting another group of hospital cleaners who, in June 2020, were arrested for protesting against the same company for exploitation.

The management, without the consent of the staff, had extended the working hours by one hour, without additional pay, starting February. Tharani filed a complaint with the union and tried to follow the old working hours, as stipulated in the contract she had originally signed. But when she tried to leave after work, she was blocked by other employees.

The case was brought to Jabatan Tenaga Pekerja and Tharani received more than RM1,200 in claims for the extra time worked. She won that battle fair and square, but now Edgenta UEMS has appealed that decision. The appeal is scheduled for e-review on March 8 at the Ipoh High Court. NGOs have helped to  raise RM63k for NUWHSAS’ landmark industrial relations case against UEM Edgenta Berhad and its two subsidiaries.

Meanwhile, her employers continue to make life a living hell for her. The constant name-calling, misgendering and mind games have taken their toll on her health. They even told her they wouldn’t hire any more “soft” people.

“I was so emotionally stressed that I tried to kill myself. I then realised that if I died, they would win. I cannot let them win. I want to prove to that company and to society that I’m a trans woman who is just as capable as anyone and I deserve respect. Many trans women are not given a chance at gainful employment. I want to change this perception that we’re not hirable. Besides, who will take care of my mother?” she says.

There are many others like Tharani who fight every day to put food on the table but not all of them are as courageous. These are the folks who greet and cheer Tharani on when she rides around town on her motorbike. These are the people Tharani fights for, and who see her as the hero she truly is.

To support Tharani and other hospital cleaners in their fight for fair treatment, you may donate to NUWHSAS by banking in with the following details.